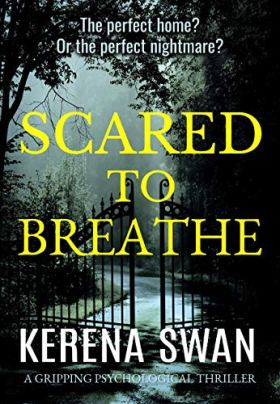 When Tasha witnesses a stabbing at the train station in Luton, she is compelled to give evidence in court that leads to Dean Rigby being convicted. But when Lewis, Dean’s brother, vows revenge, Tasha is afraid and no longer feels safe in her own home.

Tasha’s partner, Reuben, hopes to marry her and start a family soon. But Reuben is concerned about Tasha’s state of mind and urges her to see a doctor

When Tasha is left a derelict country house by her birth father, she sees an opportunity to escape Luton and start a new life. After visiting Black Hollow Hall she sees it as the perfect opportunity to live a life without fear.

At first Tasha feels liberated from her troubles. The gardener, William, who is partially paralysed but employed to maintain the grounds of Black Hollow Hall, is welcoming.

But soon Tasha realises the Hall is not quite the idyll she imagined.

When she discovers that a woman jumped to her death there years ago following the murder of her husband, strange events begin to take place and Tasha fears for her safety.

Have the Rigby family found her?

Is someone trying to scare her into selling the house?

Or is she suffering from paranoia as Reuben suggests?

“Just finished this book in two sittings. Fast read about a woman who believes she is being stalked. Is she? Or is it all in her head? The author cleverly presents a variety of possibilities that keeps you guessing. She uses descriptions so well and makes the reader feel like they are right there in the chase. I was literally squirming in my bed as I read this book. Not too graphic, not too bloody — just right!”
M Black – Amazon Reviewer

“Tasha sees a crime in action and becomes the only witness when the victim disappears. There is talk about the criminal’s family out for revenge and now she’s afraid of staying in her own home. Everywhere she turns, she thinks she sees the family of the man she’s testifying against. Reuben, her fiancee thinks she is paranoid. Who is that man that seems to follow her? Is it just her imagination, her fright, or is there actually someone stalking her? Out of the blue, she receives a letter from a law firm working for her biological father, whom she has never met. Unfortunately, he has passed away and left his entire estate to her. She thinks the country house and surrounding grounds her opportunity to be where she doesn’t feel afraid.
But Tasha realizes that not everything is as wonderful as she believes. Strange things go bump in the night and then there’s the human skeleton found buried on the grounds. Is someone trying to scare her into selling her estate? Is it the family of the man she testified against … have they found her? Is her fiancee jealous of her new found wealth and wants her out of the picture? Or is she paranoid?
Very suspenseful from start to finish, there are plenty of twists and turns to keep the reader riveted to the story. I enjoyed the feeling of living in a small village where everyone knows everyone else. The characters are finely drawn.”
Booklover

“I thoroughly enjoyed this novel. It was a perfect blend of psychological thriller and gothic suspense – written in a way that held me spellbound throughout. The setting, the beautiful old Cotswold manor, was well described. I could picture every nook and cranny of the house and grounds. The characters were written sympathetically, causing the reader to become invested in the story-line and the protagonist’s experiences. I particularly enjoyed reading about Tasha’s friendship with the octogenarian Bob and his dog, Bonnie.”
Fictionophile